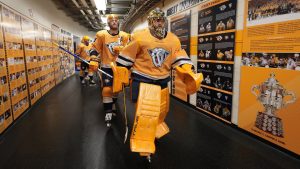 The National Hockey announced makeup dates for the postponed Nashville Predators games on Saturday. Nashville’s two home games against the Colorado Avalanche and Columbus Blue Jackets will be made up later in the season. These games were called off originally due to a water main break at Bridgestone Arena in late November.

Nashville Predators Games to be Made Up

Nashville has only played one home game since the water main break and that was an overtime win against the Anaheim Ducks on Nov. 29. The Predators next home game is set for Dec. 10 when it takes on the Ottawa Senators. Nashville has four other home games before the end of the 2022 calendar year.

The Predators will now have to manage and rotate their lineups a little more with two more back-to-backs on the slate. Kevin Lankinen will probably get a couple more starts to because of the situation with two games in two nights. Juuse Saros won’t be making those starts so they can lighten his workload.

Nashville also might have a tall order ahead of itself if its fighting for its playoff lives on the last night of the season. Trying to get a win against Colorado might be a tough task if they want to go back to the Stanley Cup Playoffs. However, it could work out if the Avalanche are resting players ahead of the post-season.