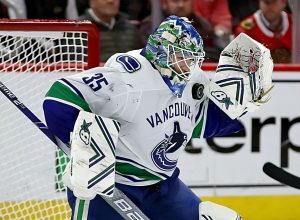 Vancouver Canucks goalie Thatcher Demko is set to be out long-term with a lower-body injury. According to Sportsnet’s Elliotte Friedman, he’s expected to be out for six weeks.

The game against the Florida Panthers was turning into an unfortunate one for the Canucks in any case. After a minute-long sequence where the Panthers scored three goals, Demko grabbed his leg after failing to stop the third goal. Demko had minor surgery on his knee in the offseason, but that doesn’t seem to be a severe part of his injury history. He lost the most games from concussion issues a few years ago.

Demko’s season has been a bit of a disaster after an excellent 2021-22. In 15 starts so far – including Thursday’s loss – he has just three wins with a goals-against average of 3.93 and a .883 save percentage. For a team that relies heavily on their goaltender to bail them out, it’s been a nightmare. The Canucks have gone all-in once again this season, re-signing Brock Boeser and extending J.T. Miller. Those deals aren’t helping this year’s results, where despite big individual performances, the team is struggling.

For now, the newly acquired Collin Delia has been called up from the Abbotsford Canucks.

While this is why Delia was signed, the hope was he’d never be used. The Canucks traded away Michael Dipietro at the end of October for help among the forwards to make room for a veteran. He will be the backup for Spencer Martin, whose numbers have been better than Demko’s. Neither goaltender is in the plans as a long-term starter, so how general manager Patrik Allvin solves this issue remains to be seen.

It’s unlikely a deal for another NHL-level goaltender happens unless the team is determined to try for the playoffs. That decision is entirely possible in a weak Western Conference despite the years-long need for a rebuild. Many fans would love it if the team took putting Thatcher Demko on injured reserve as a sign.