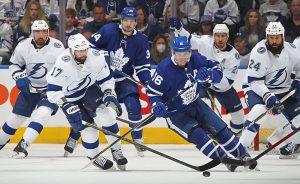 Welcome back to another day of NHL Predictions. Each day, Last Word on Hockey takes a look at the games that are happening and gives our predictions for each one, breaking down head-to-head and other factors that may play in. We also have a featured game of the day, which is considered must-watch TV. Today’s featured game is the Toronto Maple Leafs vs the Tampa Bay Lightning.

Starting this NHL predictions piece, let’s look at the Blues vs the Penguins. After putting together a seven-game winning streak, the St Louis Blues have dropped four of their last five. In their previous five games, the Blues have allowed 25 goals while only scoring 14. The Pittsburgh Penguins received scary news this week as defenceman Kris Letang suffered a stroke and remains out indefinitely. The Penguins have won 3 of their last five, scoring 13 goals and allowing 11 in that span. Jordan Binnington is expected to get the nod for the Blues, while Tristan Jarry is likely to start in goal for the Penguins.

This is the first meeting of the season between these two cross-conference franchises. The Golden Knights are coming off a 4-3 loss to the Penguins. The Detroit Red Wings also dropped their most recent outing in a shootout loss to the Buffalo Sabres. Vegas holds an impressive 10-2-1 record while playing on the road, and the Red Wings are 7-3-3 at home this season. Rookie goaltender Logan Thompson boasts an impressive 12-4-0 record and will get the start for the Golden Knights. Ville Husso has been equally impressive with a 9-3-3 record and will be between the pipes for the Red Wings.

For this NHL predictions game, Detroit takes this one as Vegas continues to stumble after their hot start.

In this Original Six matchup, the New York Rangers play host to the Chicago Blackhawks. The Rangers are on the backside of a back-to-back as they took on the Ottawa Senators last night. Jaroslav Halak is expected to start for the Rangers after their starter, Igor Shesterkin, started last night. Halak picked up his first win in his most recent start and has a record of 1-5-1 this season. Petr Mrazek is expected to get the Blackhawks’ start and has a 1-5-1 record on the season.

This contest should be a high-scoring affair considering the Rangers’ possible fatigue, and both teams’ starting goalies have struggled this season.

Tonight’s NHL predictions featured game is a rematch from last year’s first-round playoff matchup between these two division rivals. The Toronto Maple Leafs are playing solid hockey and riding a five-game winning streak entering tonight’s game. On the other side, the Tampa Bay Lightning are 7-3-0 in their last ten games, with two losses coming from the Atlantic-leading Boston Bruins. This is a must-watch game as the Maple Leafs seek retribution for their game-seven first-round exit last spring. Toronto sits second in the Atlantic division, trailing the Bruins by only three points, while Tampa Bay is nipping at the heels of the Maple Leafs in third place in the division.

Mitch Marner added his name to Maple Leaf record books tying Darryl Sittler and Eddie Olczyk with an 18-game point streak. He will be looking to extend the streak to 19 and become the lone record holder. Lightning captain Steven Stamkos picked up the 1000th point of his career earlier in the week. Toronto is back to total health in the net as Ilya Samsonov returned to action in their last outing. However, Matt Murray is expected to get the start tonight and holds a 5-1-1 record on the season. Andrei Vasilevsky will start for the Lightning; he is 9-7-1 this season and has struggled at times.

Look for a big performance from “Big Cat” Vasilevsky as he helps his team claw their way back up the Atlantic standings. Tampa takes the game, but Marner continues his point streak taking sole possession of the longest streak in Leafs’ history.