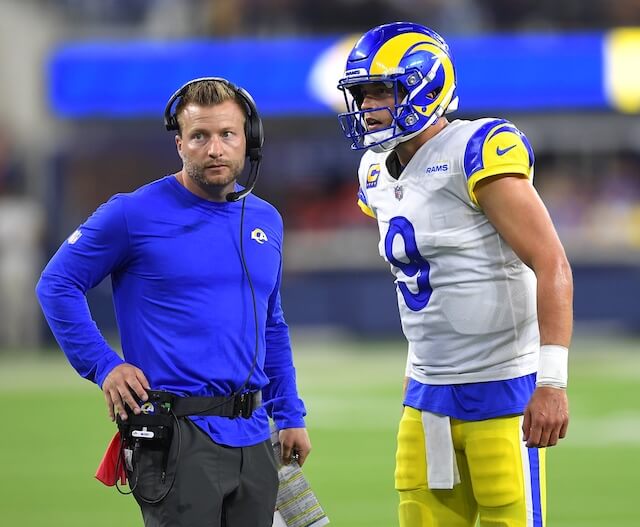 The Los Angeles Rams opened up the 2021 season in style on Sunday night, cruising to a 34-14 victory over the Chicago Bears in the first game with fans at SoFi Stadium.

The big story, of course, was the play of Matthew Stafford, who was acquired in a blockbuster trade with the Detroit Lions this offseason. The Rams’ new franchise quarterback was nearly perfect on the night, completing 20-of-26 passes for 321 and three touchdowns without a single turnover and a 156.1 quarterback rating.

Stafford immediately showed Rams fans what he is capable of as on the offense’s third play from scrimmage, he threw a 67-yard bomb to Van Jefferson for his first touchdown with the team. Stafford also later found Cooper Kupp for a 56-yard touchdown on a busted play at the beginning of the third quarter.

That ability to throw the ball deep is something the Rams offense simply didn’t have in recent years with Jared Goff under center.

After the game, head coach Sean McVay spoke about Stafford’s performance and he was particularly impressed with the deep balls, via Michael David Smith of Pro Football Talk:

“It was great job by him being able to flip his hips and make an unbelievable throw,” McVay said. “I think that’s kind of one of those things, he’s gifted, he’s got a great ability to be able to change his arm slot and make all types of throws, whether it be short, intermediate or down the field, but he’s — you’re not limited in anything you can do with him in the pass game.”

With Stafford at quarterback, defenses have to be ready for the deep ball at any time because of his cannon for an arm, which also opens up some of the shorter and intermediate throws for the Rams offense.

While the Rams obviously still have a long way to go, it was good to see them start the season off on the right foot on Sunday night. This team has Super Bowl aspirations and it will take stellar play from Stafford to achieve that goal, which they received in his highly-anticipated Rams debut.