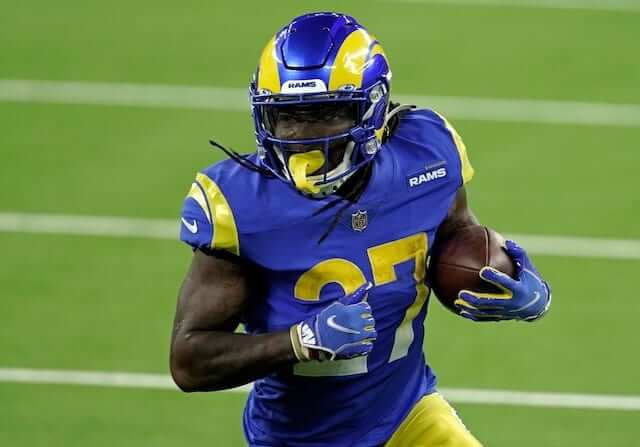 With running back Cam Akers sidelined with an Achilles tear, Darrell Henderson is now the de facto starter for the Los Angeles Rams heading into the 2021 NFL season.

The loss of Akers undoubtedly dealt a major blow to the offense under head coach Sean McVay. After all, the former second-round pick showed plenty of promise as a potential workhorse during his rookie season.

Fortunately, Henderson’s experience in the offense and track record of production gives good reason to be optimistic. Of course, his newfound status also comes with its own set of restrictions.

The preseason has been shortened to three games now with the 17-game regular season in full effect. Sean McVay made it clear that Henderson will not be taking part in any exhibition games, via Cameron DaSilva of USA Today:

“No, Darrell will not play in a preseason game. I can promise you, you’re not seeing Darrell Henderson in the preseason,” McVay said Monday to open camp.

McVay added that while Henderson’s skill has never been called into question, reducing the wear and tear on him throughout the course of a season will be the biggest challenge.

“If you look through the first half of the year last year, this has never been an ability question for Darrell Henderson,” McVay said. “This is, all right, how do we find a strategic and structured way to keep him available for all these games and what does that workload look like? Because he is the established guy in that room. You can see, when he gets the ball in his hand and he puts that foot in the ground, there’s a burst and he’s sturdy, too. … I think he is a complete back, very similar to how you’ve heard me talk about Cam. What our biggest challenge is, is not figuring out if he’s capable of doing it, it’s finding that sweet spot of how do we maximize Darrell Henderson? While also getting some of these other guys involved and figuring out, what is that touch point to keep him healthy throughout the season and a big part of our offense? Which he’s gonna be. It’s never been an ability. It’s just, all right, is he available? Because the guy’s a baller and I’m excited to see what he’ll do with this.”

There is certainly plenty of truth to McVay’s comments regarding the team’s approach with Henderson. They are not going to take any chances of him getting hurt in the preseason and are still looking for ways to keep him as healthy as possible during the 2021 campaign.

Health has been an issue for Henderson at times since joining the Rams after ending the last two seasons on injured reserve. The team can ill-afford to have their new RB1 suffer any setbacks down the line now that they have gone all-in on a trip to Super Bowl LVI.

McVay and his staff have clearly taken Henderson’s durability into consideration and are hoping for the best despite the uncertain, physical nature of the position. The onus will fall on the slew of other unproven options on the roster to show they are capable of stepping up into a change-of-pace role.