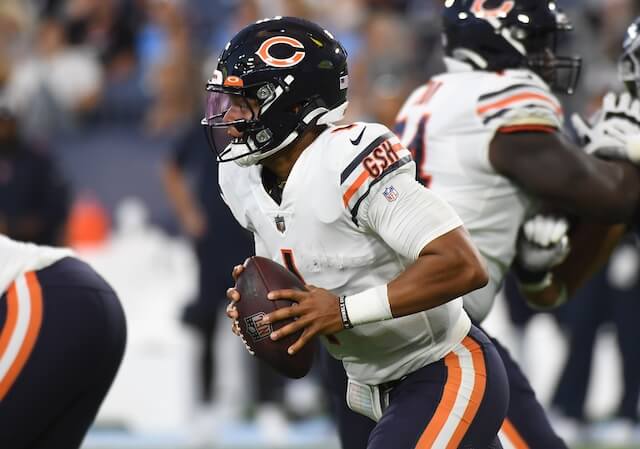 While the Los Angeles Rams acquired a franchise quarterback for now in Matthew Stafford, the Chicago Bears managed to secure their future under center by drafting Justin Fields.

There has been plenty of speculation regarding the quarterback situation in Chicago this offseason. Despite the promise that Fields showed in the preseason, head coach Matt Nagy has made it clear that quarterback Andy Dalton will be the starter in Week 1 against the Rams.

Of course, there is no telling whether or not this could change in the coming days or even during the games. This has spurred head coach Sean McVay and his staff to take precautions on each of them.

McVay spoke on the challenge of preparing for both Dalton and Fields leading up to the season opener, via Cameron DaSilva of USA Today:

“I think it would be naive for us not to prepare for them to be able to utilize him in some form or fashion,” McVay said of Fields. “But Andy is a winning quarterback in this league. Does a great job. I really have seen a lot of film of Andy, even going back to when Jay Gruden was his coordinator at Cincinnati. So, very familiar with what a really good quarterback he is. He does a great job, accurate, anticipation, recognizes the looks defensively, can straighten up protections. Andy Dalton’s a really good quarterback and he’ll be a great challenge. And then you see the ways that Justin made a lot of plays going back to his career at Ohio State (and) what he showed in the preseason. So, I think you got to be ready for either or, but it’s going to be challenge, for sure.”

The team’s approach is certainly understandable since Chicago’s quarterback conundrum could be subject to change. Should Dalton underperform or get injured, there is always a chance that Nagy opts to switch to up.

However, the Bears have given every indication that they plan on taking their time with Field’s development as a rookie. There is no question that being thrown into the fire against the likes of three-time Defensive Player of the Year Aaron Donald and two-time All-Pro Jalen Ramsey in his first-ever game could do more harm than good.

Even if the Rams have good reason to be confident in whoever they put at quarterback, McVay has never needed much of an excuse to do his due diligence on future opponents.