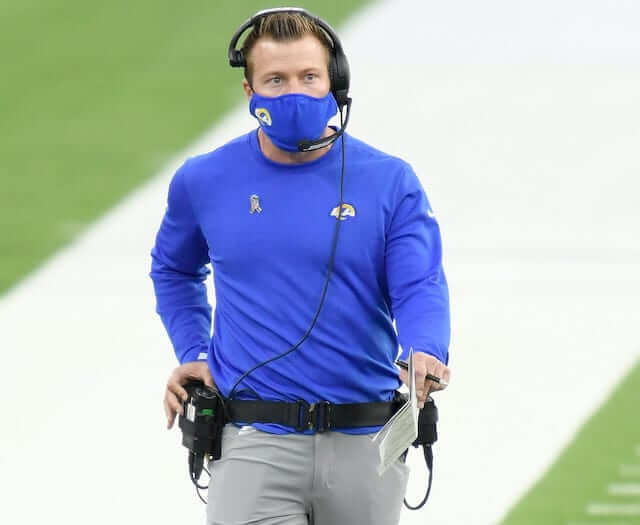 It is no secret that the Los Angeles Rams have an opportunity to become the second team in as many years to win a Super Bowl at home with this year’s festivities taking place at SoFi Stadium.

They generated some hype this offseason with their blockbuster acquisition of quarterback Matthew Stafford. Players like cornerback Jalen Ramsey, wide receiver Robert Woods and left tackle Andrew Whitworth have not been shy about embracing the championship expectations that have come with his arrival.

As fun as it is to marvel at the prospect of the Rams having home-field advantage in the biggest game of the year, McVay is not looking that far ahead.

The Rams open the 2021 NFL season with a home game against the Chicago Bears and that is what McVay’s focus is on, via Cameron DaSilva of USA Today:

“You guys ask our guys all the time about it so they can’t help but answer to it. To me, that’s so far in the distance,” McVay said this week. “Every single year is a new year. What we’re focused on is getting ready to really start our Chicago preparation and when you give yourself a chance to be relevant in those conversations, only if you take care of your business proceeding that. And so that’s where our focus is. That’s where my focus is and that’s where our players are. Now, if you ask them and you say, ‘Hey, do you want to play in the Super Bowl in your home stadium?’ I think everybody would say, ‘yes,’ but they know the way that you get there is by being totally and completely present.”

McVay’s approach is certainly understandable since it is a long season and there is no telling how this team will look down the line. Regardless, his comments indicate that he has no problem with his players embracing such expectations, as long as they stay focused on the task at hand.

All eyes will be on McVay and his plan to maximize Stafford’s skill set under center. He does not have the benefit of looking so far ahead while the offense is still being developed around their new pieces.

Fortunately, the favorable opening matchups versus the Bears and Indianapolis Colts bodes well for L.A. to find their footing before facing their first big test against the Tampa Bay Buccaneers in Week 3. Only then will there be some credence to any hype that was generated during the offseason.