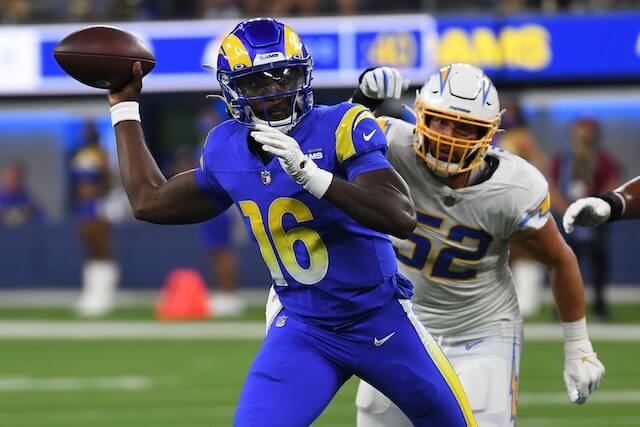 The Los Angeles Rams went into the preseason with a quarterback battle between Bryce Perkins and Devlin Hodges for the No. 3 spot on the depth chart.

Although the position for third-string QB was never set in stone by head coach Sean McVay, John Wolford’s absence from all three exhibition games called for a competition under center.

Hodges and Perkins initially split snaps in the preseason opener. However, it became clear by the second game that Perkins had gained the edge after playing the entire time.

Despite having no plans to keep another quarterback on the final roster, McVay admits Perkins’ performance caused a change of heart between him and the staff, via Gary Klein of the L.A. Times:

“If you told me a few weeks ago, ‘Did you envision keeping three quarterbacks?’ I would have told you no,” McVay said. “I think that’s a real credit to Bryce Perkins.”

The final decision was certainly understandable since the Rams would have risked losing Perkins if he was allowed to go on waivers. Given how well he played in the preseason, it was hardly far-fetched that his efforts went unnoticed by other teams looking for more depth under center.

The fact that McVay was willing to change his mind about the number of quarterbacks is indicative of not only Perkins’ play, but that the state of the roster is always changing according to personnel. Even if Wolford secured the No. 2 job with his efforts last year, the Rams now have a surplus of talented options under center should Matthew Stafford be sidelined for any reason.

This year’s roster provided further evidence of McVay’s affinity for tight ends after once again keeping four on the roster. With Gerald Everett leaving in free agency, L.A. is clearly enamored with Jacob Harris’ skillset following a busy preseason.

If all goes according to plan, neither Wolford or Perkins will have to play this season unless L.A. finds itself with a substantial lead late in the game. After all, they made quite the investment to upgrade this spot with Matthew Stafford and it has helped generate some serious Super Bowl hype for them.