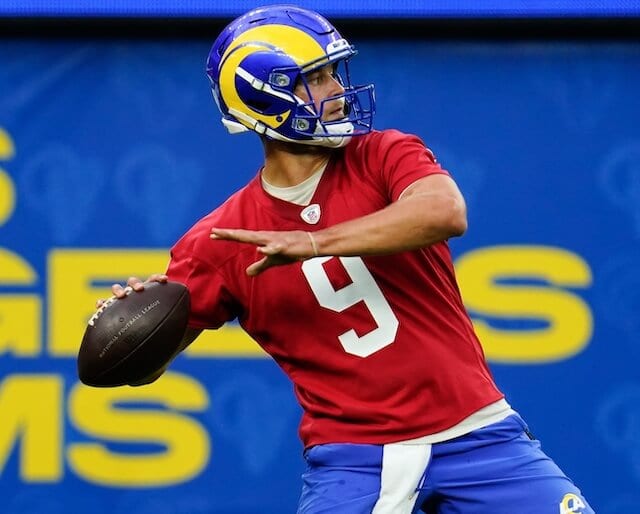 The Los Angeles Rams received their first big injury scare of training camp on Monday when quarterback Matthew Stafford hit his thumb on a teammate’s helmet while throwing a pass.

Stafford, who was the team’s big offseason acquisition, just had surgery on that thumb during the offseason.

Luckily though, he did not suffer any serious injuries as he was diagnosed with a contusion and was able to get back on the practice field on Tuesday. After the session, he discussed how he was feeling, via Stu Jackson of TheRams.com:

“It feels all right now,” Stafford said after Tuesday’s session. “Just kind of keeping an eye on it over the next 24 hours or so, but I feel pretty good. Not too bad.”

Stafford credited the Rams’ training staff for working on it to the point where he can be back on the practice field with his teammates just 24 hours later:

“And then our training staff and doctors and everybody checked it out,” Stafford said. “Nothing broken or fractured or torn, so just kind of worked on it through the night to try and get it ready to practice today. It felt good enough, so we came out and practiced.”

Rams head coach Sean McVay revealed that Tuesday should’ve been a rest day for Stafford, but he wanted to practice and actually took on a full workload:

“I felt decent out there today,” Stafford said. “Wasn’t all the way there, but it was good to get out there and practice full, so decided to do it.”

This is obviously very positive news for a Rams team that has Super Bowl aspirations that fall in the hands of Stafford. L.A. has already lost its starting running back in Cam Akers for the season and certainly can’t afford the same to happen with their quarterback.

It will be interesting to see how Stafford’s thumb responds to the full practice but it wouldn’t be surprising to see him sit out on Wednesday if he’s dealing with any soreness.