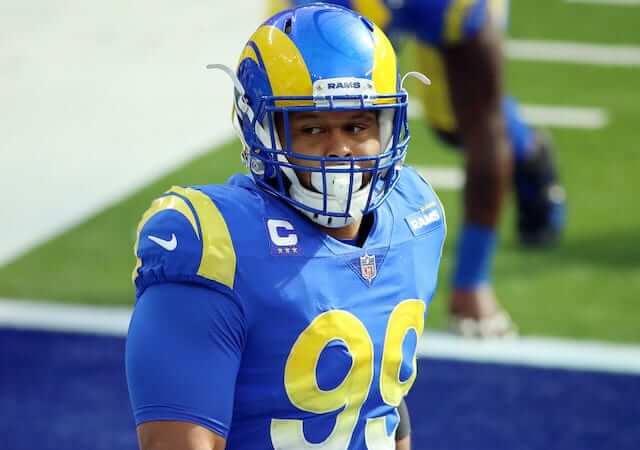 The Los Angeles Rams have enjoyed quite the influx in star power in recent years and kept it going this offseason with the acquisition of former Detroit Lions quarterback Matthew Stafford.

Expectations are as high as ever for the Rams in the 2021 NFL season with Stafford’s arrival. Given the heavy investment they made to bring him over, it is safe to say they have high hopes that he can serve as the foundation on offense for years to come.

This is a role that defensive tackle Aaron Donald has become accustomed to amid the changes to the defense through the years. Regardless, he has not missed a beat coming off his third NFL Defensive Player of the Year campaign.

Stafford has experienced firsthand what it is like to be on the wrong end of a hit from Donald. He is admittedly excited to now be on the same side, via Sarina Morales of the team’s official website:

I think his physical traits jump off the screen to you. That’s obvious. To see his ability to slash and get in between, block, defeat, one, two, three guys, whoever’s blocking him. That stuff is a bit obvious. But you know, his mental aptitude for the game is off the charts and something that I don’t know is talked about enough. He’s the guy that recognizes blocks as quickly as anybody I’ve ever seen. I’m excited to get to have him on my team and be in a red jersey when I play him in practice and not live.

Stafford’s comments are certainly understandable considering just how much of a nightmare Donald has been for opposing offenses since entering the league. Although he was lured by the prospect of playing for head coach Sean McVay on a playoff-caliber team, it seems not going against the reigning DPOY was an added benefit of landing in L.A.

Meanwhile, the Rams are relishing having a foundational piece to build on for both sides of the ball. While Donald has proven more than capable of performing even under unfavorable circumstances, the onus will fall on McVay to help smoothen the transition for Stafford and their new approach on offense.

Both players have made it clear that winning a Super Bowl has become a top priority at this point in their respective careers. After all, Stafford broke numerous franchise passing records while putting up big numbers in Detroit and Donald is missing just one piece of hardware from his Hall of Fame resume.