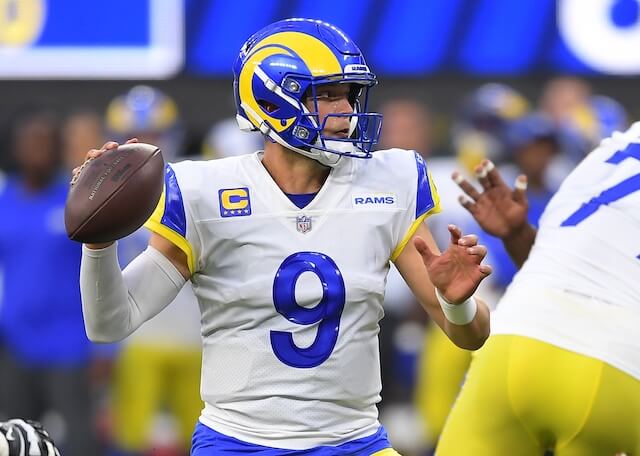 The Los Angeles Rams started off the 2021 season on a strong note, winning convincingly against the Chicago Bears on Sunday Night Football at SoFi Stadium.

Not only was it the first time fans were able to watch the Rams at SoFi Stadium during the regular season, but it was also Matthew Stafford’s debut. Stafford did not disappoint, going 20-for-26 on passing attempts, which was good for 321 yards and three touchdowns.

It was a highly-anticipated debut and Stafford discussed how his first time in a Rams uniform felt. “It was awesome,” Stafford said. “You know, it was a complete team win. Obviously, our defense did a great job getting the ball back for us three or four times it felt like. Great job on fourth down a couple times turning the ball over.

“As an offense, it was tough kind of to get into a rhythm the first half. We only had four possessions, but we were explosive on some of those and made some big plays. You know, Sean (McVay) dialed it up great and our guys went out and executed. A lot to learn. Some good to take away from it and keep building on it. Obviously, some plays we’d love to have back like every single game.”

Stafford, like the rest of the starters, sat out the preseason and he opened up about what it was like to finally hit the field.

“A lot of anticipation for this game. You know, for me, it’s a new experience for me. A new place, new stadium, new fans. The whole deal.

“But this team has embraced me and I really appreciate that. I’ve done everything I can to try to just work as hard as I can and get myself in this team. And they wrapped their arms around me and it felt good to go out there and play with them tonight. Such incredible players on this team. I’m lucky to be a part of it. I want to do everything I can to try and lead this team. It’s where we want to go. Obviously, this is just one. Gotta keep building on this. But it felt great to get out there and go play.”

Even though it is only one game, it is apparent that the atmosphere in Los Angeles is different now that Stafford is in town. Stafford could not have gotten off to a better start and it will be exciting to see how far he and the Rams can go during the season.