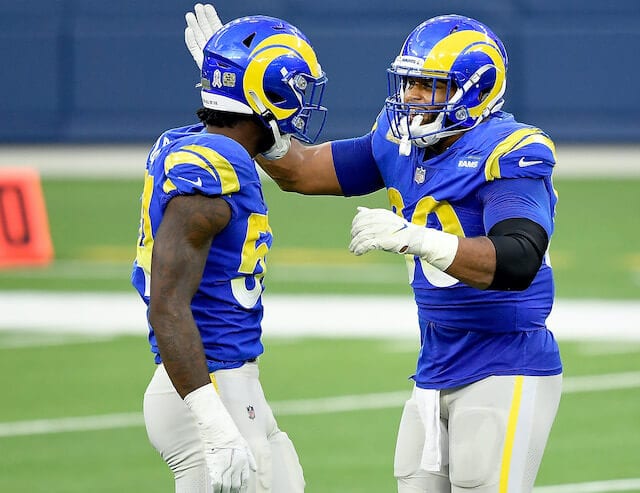 The Los Angeles Rams managed to somewhat stop the bleeding to their defense by re-signing linebacker Leonard Floyd this offseason.

There had been plenty of speculation regarding whether or not the Rams would be able to bring Floyd back. They were in the worst cap situation of any team leading up to the start of the new year and he was poised for a big payday following a stellar 2020 campaign.

Fortunately, general manager Les Snead worked his magic to get L.A. back under the salary cap to sign Floyd to a four-year, $64 million deal. It appears there was a sense of mutual excitement to see where this next chapter goes.

Floyd admits that he is looking forward to building off the resurgence his started with the Rams, per Cameron DaSilva of USA Today:

“I just believe in continuing to build off what I’ve done, just going in these next few years and continuing to grow as a player,” Floyd said after signing his contract. “I feel great. I thought negotiating with the Rams and I get to come back and play here for a few more years.”

Floyd’s train of thought is certainly understandable given the factors that went into his decision. The prospect of riding the momentum he established was much more appealing than starting fresh elsewhere

Floyd struggled to fit the billing as a former top-10 pick during his stint with the Chicago Bears. He then signed a one-year, prove-it deal with L.A after they managed to get another former first-round pass-rusher in Dante Fowler back on track.

Fortunately, Floyd was able to provide plenty of bang for his buck with a career year that saw him register 10.5 sacks, 11 tackles for loss and 19 quarterback hits. Although he undoubtedly capitalized from playing alongside reigning NFL Defensive Player of the Year Aaron Donald, his versatility in both the run and pass game make him an ideal fit for this group.

The Rams have made it clear that expectations are as high as ever in their pursuit of a Super Bowl. Retaining Floyd should help pay some major dividends amid all the turnover they experienced on this side of the ball this offseason.

Despite all the changes, L.A. will need to find a way to maintain the success they enjoyed on defense last season if they hope to take that next step. Of course, having Matthew Stafford now under center should also help pick up the slack that was missed on offense as well.