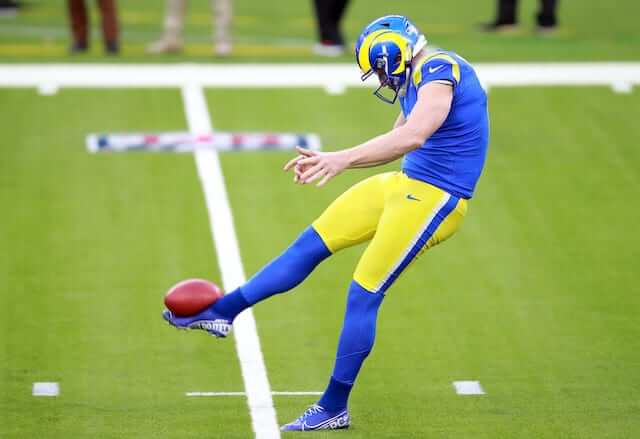 The preseason for the Los Angeles Rams included plenty of intrigue regarding the uncertainty with punter Johnny Hekker’s future.

Hekker was locked in a duel with punter Corey Bojorquez this offseason. While Bojorquez certainly took advantage of the opportunity, the four-time All-Pro was unable to do anything about it after being placed on the Reserve/COVID-19 list and missing two preseason games.

The Rams ultimately opted to let Hekker maintain his status as the anchor of this new look special team corps. Of course, this was not without some sacrifice on his part after agreeing to restructure his deal.

Hekker is grateful for both the team’s decision and the supporting cast that held him up during a trying time, via Stu Jackson of the team’s official website:

“I talked to my wife for a good amount, she was there kind of watching the game with me,” Hekker said. “I may have turned it off a little early, not going to lie. Watched some Ted Lasso to get my emotions back in check, it’s a feel-good show. But then I called a mentor that actually married my wife and I – Chris Herb, a really good friend of mine from Corvallis (Oregon). And we were just able to kind of talk about things, pray with each other and come to a better head space, which meant a lot.”

Hekker added that he is happy to be sticking around for at least the next two seasons:

“It’s something that I’m definitely very thankful for,” Hekker said. “Looking back, I’m humbled for the opportunity to come back, to feel appreciated and wanted back here. It means a lot. Especially with a talented guy like Corey, being able to get him traded to a place where he’s going to have a great impact in Green Bay, I wish him nothing but the best. But to be able to come back and be in this locker room with all the guys I’ve cultivated those friendships with, relationships, it means so much and it’s something that I’m not going to take for granted. Every time I come out here on the practice field, I’m just coming out with a renewed sense of purpose to be a good leader, be a good punter and just have a ton of fun doing it.”

According to ESPN’s Field Yates, the new deal helped clear at least one million in cap space for the Rams while giving Hekker the option to explore free agency a year earlier.

The move clears ~$1M in cap space for LA, while Hekker now has the chance to void the 2023 year in his deal and pursue free agency a year early if desired.

Hekker’s excitement is certainly understandable since it was with the Rams that he established himself as one of the best punters in the NFL. The fact that he was willing to restructure his deal in order to stay is part of the sacrifice a number of veterans made during the offseason.

Hekker is coming off a down year by his elite standards after averaging a career-low 45.6 yards per punt. Regardless, there is clearly plenty of optimism that he will be able to bounce back in the 2021 NFL season since being named team captain.

The post Rams News: Johnny Hekker ‘Thankful’ To Be Back After Restructuring Contract appeared first on Rams Newswire.