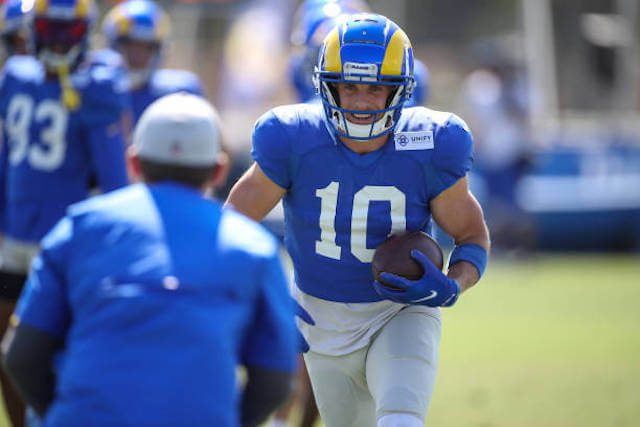 The new-look offense for the Los Angeles Rams didn’t see any time on the field during the preseason, but they did have a chance to gel together during some joint practices leading up to the season.

Quarterback Matthew Stafford looked as good as advertised in his unofficial debut with the Rams with a number of impressive throws during the joint practice with the Dallas Cowboys. Not only did he manage to spread the love to his receiving corps led by Cooper Kupp and Robert Woods, but he also showed off elements of the deep threat by finding DeSean Jackson on multiple occasions.

L.A. has high expectations for this revamped offense heading into the 2021 NFL season. Of course, it is safe to say that things are still a work in progress as head coach Sean McVay continues to tailor things around Stafford.

Regardless, Kupp is impressed with what he has son under center so far this offseason, via J. Brady McCollough of the L.A. Times:

“When it’s not against our own defense, having him see the new looks and the ball still getting out when it’s supposed to and going to the right people, he’s doing a great job,” Kupp said.

“He’s got a great demeanor. For a guy that’s coming in and having to learn all the terminology in what I think is a pretty intricate offense to be clear and articulate and command the huddle is a pretty impressive thing.”

Kupp added that he is confident that Stafford’s chemistry with the receiving corps will continue to grow:

“It’s just going to continue to grow,” Kupp said. “You can see the feel they have for each other and just the ability for DeSean to track the ball like he can and Matthew getting the ball up there and letting guys run underneath it. We love having DeSean out there, what he does to the top shelf of the defense.”

The Rams generated plenty of hype with their blockbuster trade for Stafford to kickstart the offseason. McVay quickly made it clear that he would be looking for ways to make the offense more explosive.

L.A. quickly obliged with the addition of Jackson in free agency and wide receiver Tutu Atwell during the 2021 NFL Draft. It is evident that the veteran speedster has wasted no time in making his presence felt as a bona fide deep threat in the offense.

Jackson’s speed will take some pressure off the top of the defense, which will allow Kupp and Robert Woods to take full advantage underneath. The onus will ultimately fall on McVay and Stafford to continue finding ways to utilize this personnel.