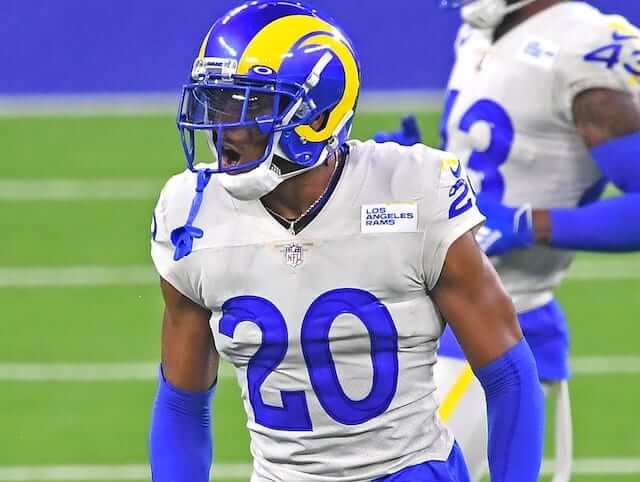 Ramsey credited Woodson’s success at both cornerback and safety as a primary reason for this title. He even suggested that this has helped him potentially consider switching to safety at some point later in his career.

For now, Ramsey is regarded as the league’s premier shutdown corner following a stellar 2020 campaign. It appears his efforts have not gone unnoticed by the best DB in NFL history.

Woodson named Ramsey and Miami Dolphins’ star Xavien Howard as two of the top cornerbacks in the league today, via D. Orlando Ledbetter of the Atlanta Journal-Constitution:

Former #Raiders and #Packers CB/S Charles Woodson discussing his induction into the @ProFootballHOF today via zoom. He likes #Rams’ Jalen Ramsey and #Dolphins’ Xavien Howard as the top corners in the game today. pic.twitter.com/kp7aJnPlmp

It is clear that there is a sense of mutual respect Woodson has for Ramsey’s game. While he may also be one of the league’s most notable trash-talkers, he has managed to back it up at every turn with the Rams.

Ramsey put together an impressive resume last season by containing the likes of elite wide receivers such as DK Metcalf, DeAndre Hopkins and Mike Evans. His dominant play helped him secure first-team All-Pro honors for the second time and a fourth consecutive Pro Bowl nod.

Meanwhile, Howard has done what he can to put himself in elite company by leading the NFL in interceptions with 10 and passes defensed with 20 during the 2020 campaign. It appears this has helped him gain the edge over other notable cornerbacks such as Jaire Alexander, Marlon Humphrey and Stephon Gilmore in the eyes of Woodson.

Ramsey put on his recruiting hat for what was an eventful offseason after making pitches to Gilmore and Tennessee Titans wide receiver Julio Jones. Despite coming up short in his efforts, this has not stopped him and the Rams from embracing Super Bowl expectations in the 2021 NFL season.