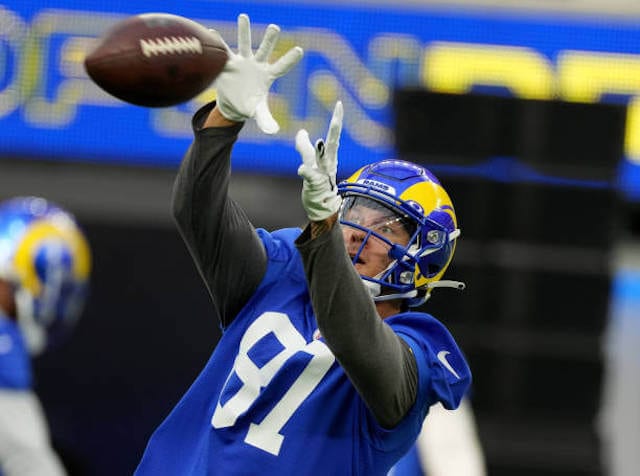 Los Angeles Rams wide receiver Ben Skowronek is among the new faces looking to make his presence felt leading up to the 2021 NFL season.

Skowronek joins a crowded receiving corps that is loaded with new weapons for quarterback Matthew Stafford. Fortunately, he has his own particular set of skills that could be useful for head coach Sean McVay.

Unlike last year, this rookie class has enjoyed the benefit of a full offseason leading into their NFL debut. Coaches and players alike were able to get a firsthand look at where the team is before training camp.

Skowronek admits that while there are some early challenges, he is excited for the opportunity to make his presence felt at camp, via Glen Marini of WANE-TV:

“OTAs went really well,” he said. “I’m back home for a couple weeks but the six weeks I spent out there in L.A. was awesome, just getting to know everybody on the team and just getting adjusted to the team in general. But it’s been nothing but great. Obviously challenging learning an NFL playbook and adjusting to the NFL game, but it’s been a lot of fun. I’m really looking forward to training camp and just continue progressing and continue learning the system and kind of building that chemistry within the offense. I just can’t wait to get back out there in a couple weeks and keep getting better every day.”

Every rookie is expected to go through their fair share of growing pains throughout the offseason. It is encourage got see that Skowronek appears to be adjusting well at the next level.

Of course, expectations are higher than ever in L.A. and young players hoping to make the final 53-man roster will need to prove they are reliable to contribute when needed. Otherwise, the coaching staff will simply go with a more experienced option in order to limit the risks.

Skowronek is an intriguing prospect that landed on the Rams’ radar leading up to the 2021 NFL Draft. While the team put an emphasis on shoring up some speed in the receiving corps, he is a big-bodied target with an affinity for downfield blocking.

Skowronek is optimistic that his physical skill set and versatility will help pay some dividends when it comes to making the roster. He may need to show that he can at least contribute on special teams right away while he gets more comfortable with the playbook.