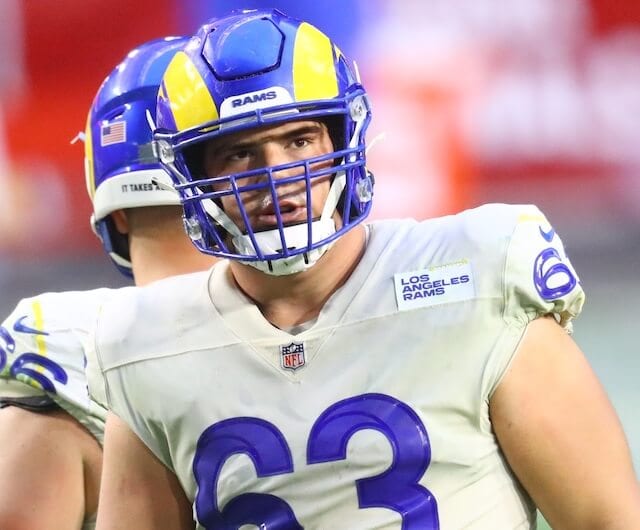 Los Angeles Rams center Austin Corbett has established himself as a bit of a jack of all trades to start his career.

The 23-year-old played left tackle during his college days at Nevada. He then made the transition inside to center during his time with the Cleveland Browns before switching to left guard during his first season with the Rams.

Corbett was once again asked to move positions to the other side of the offensive line and playing right guard during the 2020 campaign. He is now battling for the starting center job going into the 2021 NFL season.

Corbett admitted during his presser at the beginning of training camp that his experience moving around the offensive line throughout his career has helped him become accustomed to the switch this offseason:

“Moving inside to center, it’s really nothing new for me I did enough of it in Cleveland. Whether it’s a backup spot if their starting center was getting some practice off due to injury, or even training camp down there, a lot of preseason action,” Corbett said. “So it’s not new to me, by any means, I’m very comfortable at it. This offseason period during OTAs, it was a really good time to get on the same page as [Matthew] Stafford and the rest of the offensive line, how they want things communicated. Taking it slow, getting those steps in and just kind of understanding different things with Coach McVay’s offense.”

Corbett added that his time in head coach Sean McVay’s system and playing alongside center Austin Blythe has helped pay some dividends:

“I think over the last two years playing guard has really helped me understand the offense even more and just to hear [Austin] Blythe’s calls, understand what he sees and just take it from there.”

The departure of Blythe clearly led to a notable void for L.A. to fill up front this offseason. Corbett will be battling Brian Allen, Coleman Shelton, and Steven Wirtel for the starting job.

The Rams took many by surprise by opting not to use their resources to shore up some depth along the offensive line. However, their lack of action is indicative of the confidence they had that the solution was somewhere in their current personnel.

L.A. is looking to Corbett as one of the players that can potentially step up into such a crucial role as the anchor in front of quarterback Matthew Stafford. It will be interesting to see if the team’s faith is ultimately justified.