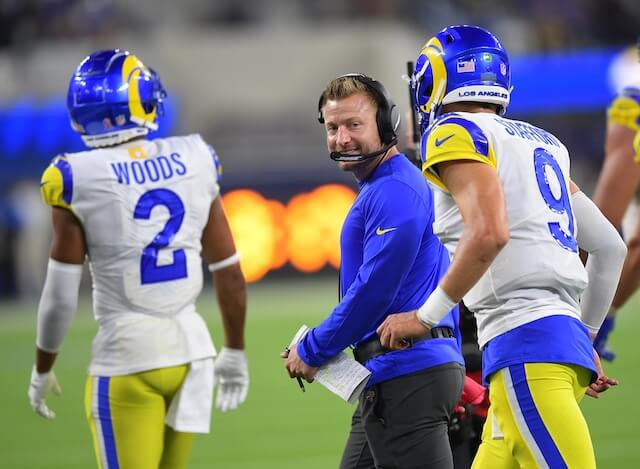 Football is finally back and so are the Los Angeles Rams as they hosted the Chicago Bears on Sunday Night Football in Week 1 in what was the first game with fans at SoFi Stadium.

It also marked the highly-anticipated Rams debut of quarterback Matthew Stafford and he did not disappoint, leading his team to a convincing 34-14 victory to start off the season on a high note.

It only took three plays for us to see why the Rams gave up Jared Goff and two first-round picks to acquire Stafford as he chucked up a beautiful bomb to Van Jefferson for a 67-yard touchdown.

That set the tone for the Rams offensively as Stafford was near perfect on the night, completing 20-of-26 passes for 321 yards and three touchdowns with no turnovers.

Stafford wasn’t the only storyline from this game, but he certainly was the main one, so he is where I will start for my weekly observations and analysis:

Matthew Stafford was everything we hoped he would be

Rams fans knew they were getting an upgrade at quarterback when the team acquired Stafford, but until Sunday night, we weren’t quite sure what it would all look like since he didn’t play in the preseason.

What we saw was exactly what he hoped for though and that was a quarterback that was in control all night, moving around the pocket well and launching the ball deep to his plethora of receivers that can get open down the field.

Not to take a shot at Jared Goff, who took the Rams to a Super Bowl, but this offense is just completely different with Stafford. Goff’s longest completion all of last season was for 56 yards, and Stafford already matched that with a 56-yard bomb to Cooper Kupp to open up the third quarter and surpassed it with the 67-yarder to Jefferson.

The fact that defenses now have to respect and account for the long ball when facing the Rams also opens up some of the shorter and intermediate routes as well, giving Sean McVay a full playbook at his disposal, which is something he didn’t have with Goff.

Now, Stafford will have to come out and replicate this performance next week. But as far as debuts go, Stafford couldn’t have drawn it up to go better than it did.

One of the other big question marks for the Rams going into this game was how their defense would look under new defensive coordinator Raheem Morris.

Now, we all knew the Rams defense would be good, especially against a lackluster Bears offense led by Andy Dalton. But it is fair to assume the defense will take a bit of a step back from last season when they were the best in all football.

Not only did they lose coordinator Brandon Staley, but they also lost some key players like John Johnson III, Michael Brockers, Samson Ebukam and Troy Hill.

Despite all that though, the Rams defense still looked like a very quality unit again capable of being one of the best in the league. They did look different, however, and the biggest reason for that was Jalen Ramsey.

Ramsey was one of the best defensive players in the league last season, locking down top receivers on a weekly basis. While he was just as dominant, if not more, in this game, he did it in a different way.

Ramsey wasn’t shadowing the Bears’ top receiver Allen Robinson in this game. Instead, he was often playing in the slot and near the line of scrimmage, which allowed him to better utilize his incredible instincts and ability to find the ball. Ramsey is arguably the best tackling defensive back in football and he showed that on Sunday night with nine total tackles and a team-leading two for loss.

The fact that the Rams can take their best cornerback, play him at the line of scrimmage and be just as successful just shows how dangerous this defense can be because it will be hard to predict what they’re trying to do all season.

Outside of Ramsey, the Rams defense was largely similar to how it looked last season schematically. Even though they gave up a lot of yards and first downs and the Bears dominated time of possession, the Rams made it clear that they were not going to get beat on any deep plays, often daring Chicago to run it.

With how explosive the Rams offense is with Stafford, the defense will not have to be perfect for this team to win games. Because of that, it makes sense to scheme against big plays, making teams put together long drives and execute in the red zone to beat them.

Henderson, running game made strides in second half

Considering Michel just got to the Rams though, Henderson unsurprisingly saw a majority of the snaps against the Bears and seemed to get better as the game went along.

With the Rams’ talent on the outside and Stafford’s ability to throw the deep ball, L.A. will not have to be the best running team in the league to be successful. They will have to be at least average though as playing complementary football will open up the passing game even more for Stafford and Co.

Through the first three quarters against the Bears, the Rams had essentially no run game with Henderson carrying the ball seven times for just 12 yards.

That obviously isn’t going to get the job done and is cause for some concern. There is some positive to take away, however, as Henderson finished the contest with nine carries for 58 yards in the fourth quarter alone, helping L.A. put the game away.

Overall on the night, Henderson finished with 16 carries for 70 yards and a touchdown.

I’m still a bit worried about the Rams’ running game and hope to see a little more of Michel moving forward in order to keep Henderson fresh. Regardless though, it was good to see them make strides in the run game as the night went on.

Looking past the Rams game now, I just wanted to point out that the margin for error this season will be very low as the NFC West is again looking like an absolute gauntlet.

The Seattle Seahawks and Arizona Cardinals both earned convincing road victories over quality opponents, and although the San Francisco 49ers almost gave up a big lead to the lowly Detroit Lions, they looked dominant for most of the day after getting a number of key players back from injury.

With Stafford, I still believe the Rams are the best team in the division. It’s clear that the NFC West won’t be a cakewalk though and the Rams will have to play their best football week in and week out.

The Rams debuted their new white throwback uniforms and Week 1 and I just wanted to point out that they were absolutely beautiful, as were the end zone designs at SoFi Stadium.

L.A. is still expected to wear its “bone” uniforms a handful of times this season, but if it were up to me, they would ditch those completely and just stick with these new white ones.

Next week the Rams will hit the road for the first time for a 10 a.m. PT game against the Indianapolis Colts, who lost to the Seahawks, 28-16, this weekend.

It will be a tougher test than the Bears, but if the Rams defense can get pressure on Carson Wentz then they should have a good chance of coming home from Indy with a 2-0 record.