Northwestern alum Rashawn Slater is officially in the fold. Per a team press release, the Chargers’ first-round offensive lineman has formally signed his rookie deal. 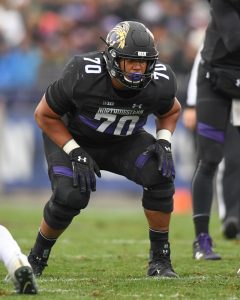 [RELATED: Vikings Wanted Slater At No. 14]

The Bolts took Slater No. 13 overall, beating the Vikings and other interested clubs to the punch. The son of former eight-year NBA veteran Reggie Slater, Rashawn started 37 games at either left or right tackle between 2017 and 2019. This included a sophomore season where he earned Third-team All-Big Ten honors. Slater also fared well against Chase Young in their final matchup of the 2019 campaign, not allowing the ex-Buckeyes phenom to record a quarterback hit when they were matched up. Despite shifting from right to left tackle as a junior, Slater did not allow a sack in eleven games that year.

Slater managed to maintain his high draft stock despite sitting out the 2020 campaign. Some say the 305-pounder lacks the elite length needed for the outside. The Bolts disagree — they’ll use him at left tackle. They’ll be counting on him big time after watching quarterback Justin Herbert eat 32 sacks last year.