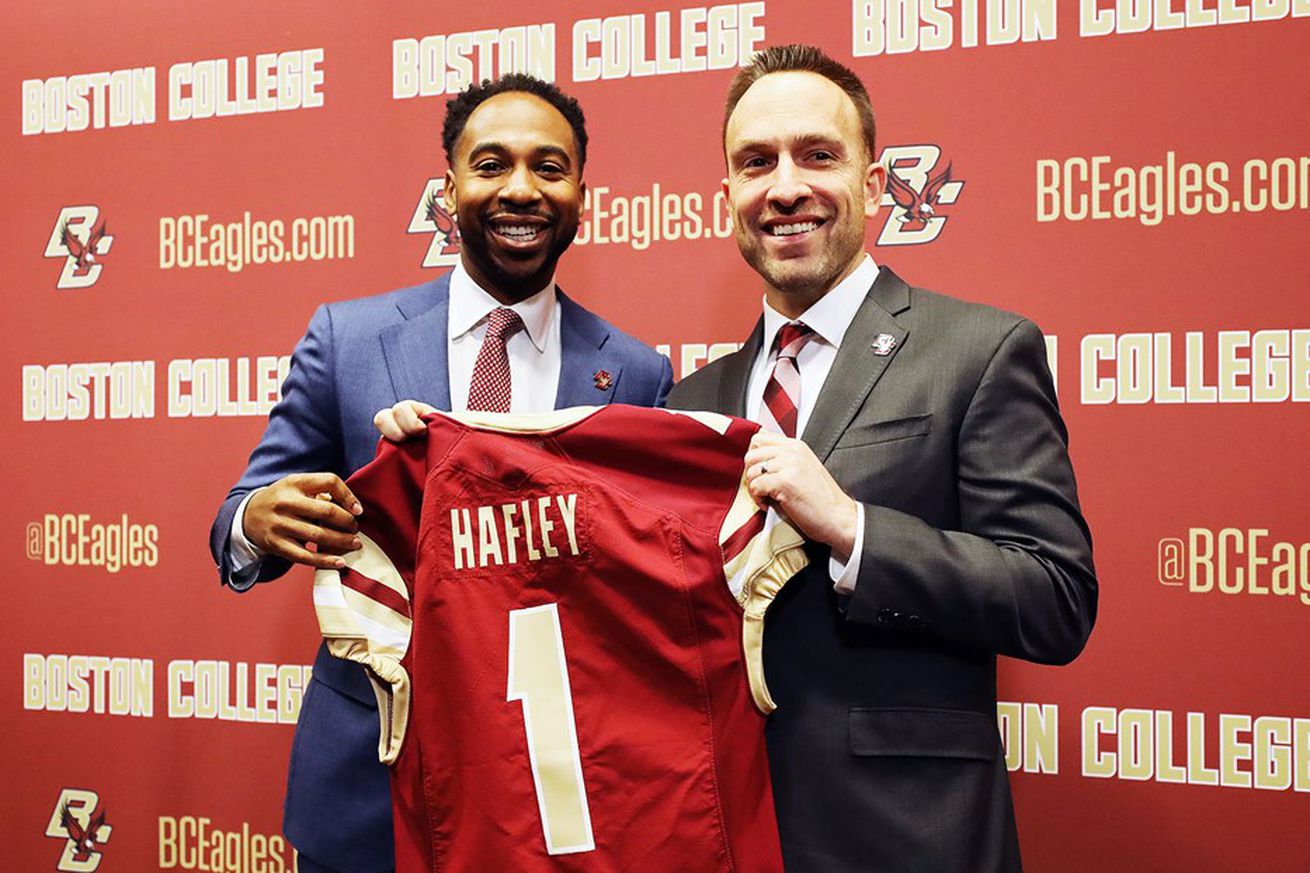 New UCLA Athletic Director Martin Jarmond hired Jeff Hafley to coach the Eagles football team. Could he be filling a similar vacancy for the Bruins as soon as he gets to Westwood? | Boston College Athletics

Martin Jarmond is UCLA’s new Athletic Director. Here’s how he can start turning the department around immediately.

So, UCLA has hired its new Athletic Director.

Ben Bolch of the LA Times reports that Martin Jarmond from Boston College has agreed to a six-year contract which will pay him $1.2 million in his first year and increase to $1.7 million in the final year of the contract.

That goes against the face of what was expected. The conventional wisdom was that UCLA was going to pay its new AD not just less than Dan Guerrero, but substantially less than him. I think most Bruin fans would have been ok with that.

But, no, UCLA will actually pay Jarmond more than Dan.

I’m ok with that, but Jarmond needs to understand that, unlike Boston College, he’s not walking into a situation where the potential donor base has been untapped. Instead, UCLA fans are suffering from donor fatigue. We’ve been hit up over and over by Dan Guerrero’s department to donate.

Jarmond cannot expect to be able to come in and solve UCLA’s issues by raising more money, at least not by continuing to tap the same donors for more. Why?

Because Bruin fans are tired of losing.

Now, to be fair, I was going to hold off at least a few days in writing this piece. But, after reading Tony Siracusa’s excellent article on The Last Word on College Football which explains what Jarmond is walking into, I decided that UCLA’s new AD deserves to understand what he can do immediately to start things off on the right foot with Bruin fans.

UCLA has seen football attendance plummet. How bad has attendance been at Bruin football games? Bad enough that, during this COVID-19 pandemic, the running joke when discussing the virus and sports is that it was UCLA football fans who created social distancing.

Jarmond needs to understand that 7-17 over two seasons by the supposed “savior” of UCLA football isn’t cutting it. He needs to look at the state of football recruiting which has gone into something of a death spiral under Chip Kelly and realize that “more time” is not what’s needed to turn the program around. What’s needed is a new direction for the program.

Now, the conventional wisdom holds that UCLA cannot afford to fire another coach. After all, the dismissals of Jim Mora and Steve Alford have been blamed for putting UCLA in the red in the first place.

But there is a way for Jarmond to have an immediate impact on both the football program and the department’s budget situation. It just requires rather bold action by the new AD (and probably the approval of UCLA’s attorneys).

The best part about it is that it simply requires UCLA to enact Paragraph 11 of Chip Kelly’s contract.

Paragraph 11 can be found at the top of page nine and it details “Termination by Death or Disability of Coach or by Force Majeure.”

No, I’m not advocating, or even suggesting, that Jarmond have Kelly whacked Tony Soprano-style. I’m suggesting that he invoke the Force Majeure clause of Kelly’s contract. The relevant part of Paragraph 11 reads:

In the event of Coach’s inability to continue to perform all of Coach’s essential job functions under this Contract by reason of a force majeure event lasting more than sixty (60) days, this Contract (and Coach’s employment hereunder) shall thereupon terminate and all future rights and obligations between the parties under this Contract shall cease. Because of the exigencies of operating an NCAA Division I Athletics program, Coach acknowledges that a termination pursuant to Paragraph 11 shall not be deemed a termination without cause under Paragraph 12 below.

Please re-read that for a moment.

UCLA only got three practices in before they had to stop due to the pandemic. That means Kelly has been unable to perform his job duties since at least March 10th. That’s 68 days.

That means, technically, Kelly’s contract terminated over a week ago without either party doing anything because the contract says “this Contract (and Coach’s employment hereunder) shall thereupon terminate and all future rights and obligations between the parties under this Contract shall cease.”

Now, it may be me, but that sounds like the contract is already terminated.

Bruin fans now just need someone to enforce that clause. Dan Guerrero and Josh Rebholz won’t do it. Jarmond needs to do so. Or, perhaps, an alum or season ticket holder should force the department to enforce the contract’s provision.

This is a risk-free way for the department to dump Kelly without having to pay any buyout at all.

How would the football program continue in the short-term? Well, offensive coordinator Justin Frye worked for Jarmond for one season at BC. He could be named interim head coach, effective immediately.

How could Jarmond set the proper course for the football program moving forward? Sam Connon of the Daily Bruin points out that Jarmond was the point person on Ohio State’s 2012 football coaching search:

One of Jarmond’s key roles at Ohio State was as a director for coaching search committees, with his most notable hire being football coach Urban Meyer in 2012.

There was plenty of speculation that Southern Cal would go after Meyer if the school fired Clay Helton. With Helton still there, Jarmond could try to bring Meyer to Westwood with him.

Unlike Kelly before he came to Westwood, Meyer has never had losing season as a head coach in nineteen seasons of coaching. Kelly’s previous two seasons, one with the Philadelphia Eagles and the other with the San Francisco 49ers, were both losing seasons. That was a red flag I raised before Kelly was hired.

Meyer, however, has never lost more than five games in a season. Now, to be sure, the current state of the program could certainly end that very quickly, but things can’t get any worse than they’ve been under Kelly.

The final piece is the easy part. As soon as Meyer gets things going in Westwood, the fans will fill the Rose Bowl, reversing the attendance decline. Heck, Jarmond and Meyer can even get creative with his contract by tying the talent fee portion of Meyer’s contract to attendance increases and making Meyer earn his keep by getting fans in the stands, something Kelly has not been able to accomplish, and filling the department’s coffers in the process and helping to solve the budget process.

And, if Meyer’s not ready to get back into coaching immediately, UCLA can head into the 2020 season, if there is one, with Frye as the interim head coach while Jarmond conducts a search. The search could result in Meyer leading the Bruins in 2021, Frye removing the interim from his title, or an up-and-coming head coach being hired, but that would remain to be seen.

The most important thing, though, is that Jarmond needs to recognize that Kelly should not be allowed to finish his contract. Two seasons and three completed recruiting cycles have proven that and let’s not forget that recruiting hasn’t gotten much better so far for 2021. Immediate action is required and the Bruins’ new athletic director is just the man to do it.

This article originally appeared on The Mighty Bruin. Joe Piechowski is the managing editor of The Mighty Bruin and spent nearly six years in the same role with Bruins Nation.