The Wizards and Spencer Dinwiddie are in agreement on a three-year, $62MM deal that will land the veteran point guard in Washington, reports Shams Charania of The Athletic (Twitter link). The club will acquire Dinwiddie from the Nets via sign-and-trade. 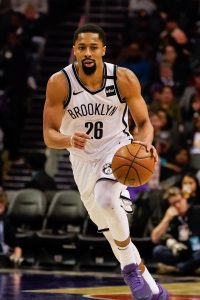 That $62MM figure had been expected for Dinwiddie’s deal with the Wizards, since it’s the most the team could pay him by looping his sign-and-trade into the larger Russell Westbrook deal with the Lakers, notes Fred Katz of The Athletic (Twitter link).

According to Charania (Twitter link), the Nets will receive a second-round pick and a draft-pick swap from the Wizards in the sign-and-trade agreement. The move will also create an $11.5MM trade exception for Brooklyn.

Additionally, the Wizards will trade Chandler Hutchison and a second-round pick to the Spurs as part of the multi-team deal, Charania reports (via Twitter). Moving Hutchison’s $4MM+ salary will allow Washington to remain out of tax territory for now, tweets ESPN’s Bobby Marks.

Adrian Wojnarowski of ESPN (Twitter link) provides the details on the draft assets, reporting that the Wizards are sending a 2022 second-rounder to San Antonio and a 2024 second-rounder to Brooklyn, as well as a 2025 pick swap to the Nets.

In total, Wojnarowski tweets, the deal will include five teams: the Wizards, Nets, Spurs, Lakers, and Pacers. The Westbrook trade agreement and the Wizards’ deal for Aaron Holiday will become part of this larger deal once it’s officially completed after the moratorium lifts on Friday.

Here’s what the full deal should look like, based on the details reported to date:

As Eric Pincus of Bleacher Report points out (via Twitter), there will likely be at least one more piece involved between the Nets and Spurs in order to satisfy the rule that every team in a multi-team trade must “touch” two other teams in the deal. As reported so far, Brooklyn and San Antonio are each only receiving assets from (or sending an asset to) the Wizards. That last piece would likely be something minor, such as cash or the draft rights to a stashed player.

In Dinwiddie, the Wizards are getting a 28-year-old point guard who is coming off a lost season. He appeared in just three games before missing the rest of the 2020/21 campaign due to a partially torn ACL. However, Dinwiddie was reportedly cleared for all basketball activities in June and the expectation is that he’ll be good to go for the fall.