The preliminary 2022 Los Angeles Dodgers schedule has been unveiled, with the club slated to face the Colorado Rockies at Dodger Stadium for Opening Day on Thursday, March 31. That’s part of a six-game homestand to begin the season, with the Arizona Diamondbacks part of that stretch.

Next season will see the National League West face the American League Central for Interleague play. The Dodgers’ first matchup with an AL opponent comes at home against the Minnesota Twins from April 12-13.

The Dodgers also will face the L.A. Angels both at Dodger Stadium (June 14-15) and in Anaheim (July 15-16) for the annual Freeway Series.

With the Dodgers hosting the 2022 MLB All-Star Game due to the event getting cancelled in 2020 because of the coronavirus (COVID-19) pandemic, the team will close the unofficial first half of the schedule in Southern California and open the second half at home as well against the San Francisco Giants.

MLB’s All-Star Week in 2022 will include community activations and events, the Home Run Derby on Monday, July 18, and All-Star Game on Tuesday, July 19.

The Dodgers will be home for several 2022 holiday dates, including facing the Pittsburgh Pirates on Memorial Day (May 30), Cleveland Guardians on Father’s Day (June 19), Rockies on the 4th of July, and Giants on Labor Day (Sept. 5).

Per tradition, the Dodgers also are at home for Jackie Robinson Day — April 15 — to play the Cincinnati Reds.

With a budding rivalry continuing to develop with the San Diego Padres, the teams will play five of their six series during the 2022 season on the weekend. The first matchup comes at Petco Park for a three-game set from April 22-24.

The Padres’ first visit to Dodger Stadium doesn’t come until June 30-July 3 for a four-game series. The lone weekday series between the Dodgers and Padres next season is Sept. 27-29 at Petco Park.

The Dodgers conclude the 2022 regular season at home with a weekend set against the Rockies from Sept. 30-Oct. 2. Their longest road trip of the year is 10 games during the month of May for series with the Philadelphia Phillies, Washington Nationals and Arizona Diamondbacks. 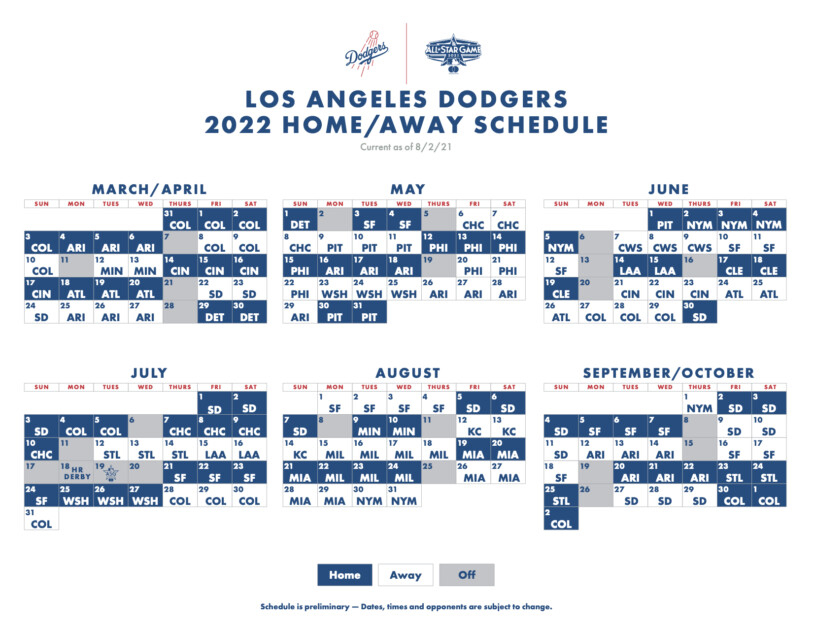 The Dodgers will announce a 2022 promotional and giveaways schedule at a later date.

Have you subscribed to the Dodger Blue YouTube channel? Be sure to ring the notification bell to watch player interviews, participate in shows and giveaways, and more!