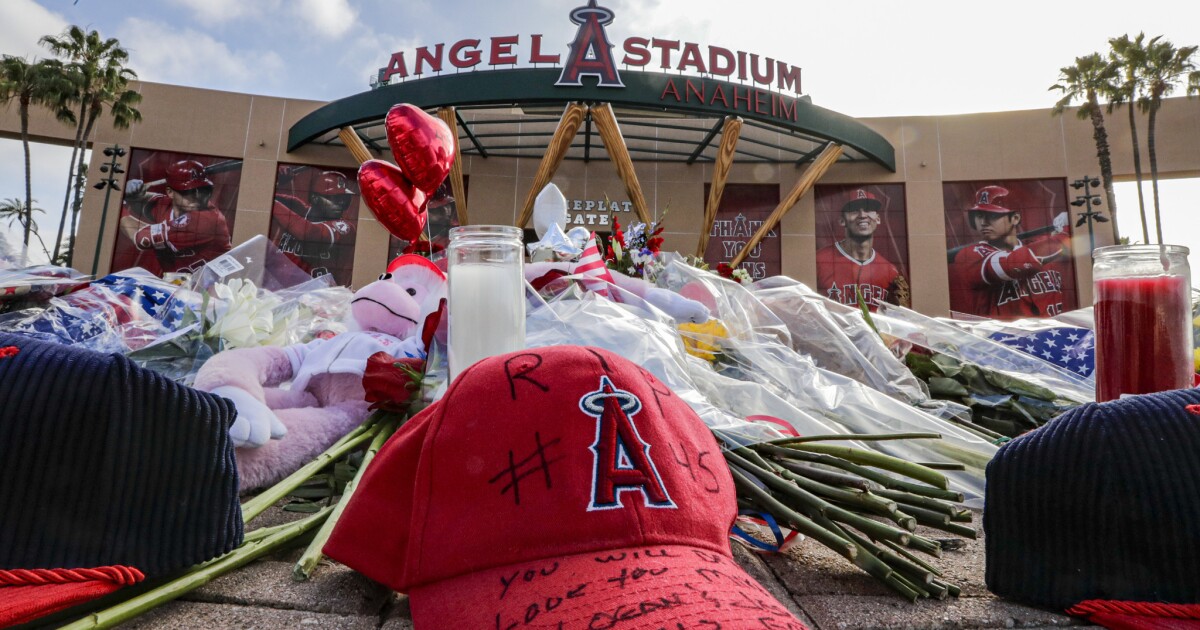 If the Angels are to find a measure of
closure as they grieve the July 1 death of pitcher Tyler Skaggs, if they are to feel more peace than
pain when they think of their fallen teammate and return some sense of normalcy to their season, then Monday’s private memorial service for the pitcher could be a therapeutic milestone.

“What is normal?” Angels catcher Dustin Garneau said. “We all lost a really good friend, so I don’t know what normal is in this situation. I have no idea what the future holds for us Monday or afterward because not many guys have been through this or experienced something like this.”

Kevin Jepsen has. The former Angels reliever was a rookie in 2009, the year 22-year-old pitcher Nick Adenhart was killed along with two friends by a drunk driver in a Fullerton intersection April 9
, just three days into the season.

Jepsen and Adenhart came up through the minor leagues together and were good friends. They broke camp with the big league club that spring and had lockers next to each other.

Those Angels experienced the same whirlwind of emotions in the two weeks following Adenhart’s death as these Angels are now — shock, grief, denial, anger, pain, sadness, a profound sense of loss.

It wasn’t until several players, coaches and team officials attended a memorial service for Adenhart in Maryland on April 17 and a private service for the entire team was held in Angel Stadium on April 23 that the fog began to lift.

“Once you put him to rest, it’s kind of finalized,” said Jepson, who retired in 2018. “Up until that point, you’re still not wanting to believe it. You’re still waiting for him to walk through that door.

“Once you have the service, it’s kind of like, ‘OK, this is real, it’s not a dream, we’re not going to wake up from this.’ They’re really gone.”

The entire Angels team will spend Monday’s off day ahead of
a two-game series in Dodger Stadium honoring Skaggs, who was 27 when he was found dead in a Southlake, Texas, hotel room. No cause of death has been given, though police did not suspect foul play or suicide.

Fox Sports West and Fox Sports Go will provide delayed coverage of the Celebration of Life ceremony beginning at 7 p.m. Monday. The Angels’ combined no-hitter victory over the Seattle Mariners from July 12 will be re-broadcast immediately after the ceremony broadcast.

“It’s going to be tough,” Angels reliever Cam Bedrosian said of Monday’s service. “But at the same time, it’s going to be a celebration of his life, and from what everyone has seen, he touched so many people and meant so much to a lot of people.

“I don’t know exactly how it’s going to be after that. I’m hoping we can celebrate his life and then be able to keep playing ball, because that’s what he would have wanted us to do. If he were here today, he’d be saying, ‘Let’s go, let’s go play some ball and win some games.’ ”

The Angels have had little time to process the devastating loss. They resumed play in Texas on July 2, the day after Skaggs died, and have fought through grief and tears to win eight of 14 games — wrapped around the four-day All-Star break — entering Sunday’s game at Seattle.

“I think the tragedy brought the team together,” Garneau said. “Guys realize how small baseball is in the scope of life, and it’s made baseball a little more enjoyable, a little easier for guys to come out and play. And when they do struggle, it makes it easier to get back on the horse and play again.”

Tragedy had an opposite effect on Jepsen, who struggled so much in his first four appearances after Adenhart’s death, giving up eight runs in 3 2/3 innings, that he was demoted to triple-A, where he remained for seven weeks before being recalled.

“When you show up to the field you have to pretend like nothing is wrong because you have a game that day and you have to do your job,” Jepsen said “But it’s just such a tough thing to handle during the season. It’s terrible at any point in life to lose somebody. … If you were working a normal job and a friend or co-worker died, you’d take a week or two off to grieve. In baseball, you get a day, and then you’re supposed to go back to business as usual. The fans are paying for the seats and you’re still on TV. It’s so different.”

Angels manager Brad Ausmus and general manager Billy Eppler have said repeatedly that “there is no playbook” for how to handle the death of a beloved teammate in the middle of a season. The Angels are letting instincts guide them.

That is what compelled star center fielder Mike Trout and others to pour their hearts out in a tear-filled post-game news conference after a July 2 win over the Texas
Rangers, the first game following Skaggs’ death.

And for the team to don No. 45 Skaggs jerseys for their first home game without the left-hander July 12, a night that began with Skaggs’ mother, Debbie, throwing out the ceremonial first pitch and ended with the Angels placing those jerseys lovingly around the mound after Taylor Cole and Felix Pena combined to no-hit the Seattle
Mariners.

“We’re staying strong, we’re staying together, and that’s what makes this team great,” Trout said. “It’s going to be tough this season. Obviously, we’re going to remember him always. It just seems like everything we do at the stadium, he always comes up.

“You walk by his locker every day, you miss that funny — every time you’d go up to him, he’d have that smirk on his face, either in a sarcastic way jokingly or just trying to put a smile on your face.

“It’s going to be with us for sure, for the rest of time. We’re always going to be thinking about him. It’s going to me emotional. It’s different for everybody. It’s just something we have to get through.”

Trout, Justin Upton, Kole Calhoun and first baseman Albert Pujols are among the veterans — along with Ausmus — younger players are leaning on.

There was a similar dynamic at play in 2009, when manager Mike Scioscia
and veterans Torii Hunter, John Lackey, Jered Weaver, Brian Fuentes and Scot Shields helped guide younger players through their grief.

“All the younger guys kind of looked up to the older guys,” Hunter said in an April interview for a story on the 10-year anniversary of Adenhart’s death. “I just said, ‘Hey man, this is unfortunate, but you can’t take life for granted. Kiss your loved ones. Tell your family you love them every day because you just never know when it’s gonna happen.’ ”

The 2009 team struggled immediately after
Adenhart’s death, losing nine of 14 games. Over time, the memory of the pitcher helped fuel their motivation. The Angels got hot in June and July, won the AL West and swept Boston in the division series before losing a six-game AL championship series to the New York Yankees.

The Angels, Bedrosian said, have adopted a mantra of “leaning on each other.” Players are “opening up a little more with each other, sharing how you feel with each other,” a process that is “growing our bond as brothers even more.”

The Angels will carry Skaggs’
memory in their hearts for the rest of a season in which the games will provide a refuge of sorts.

“Everyone deals with tragedy at some point in their lives—you lose loved ones or you lose friends,” Ausmus said. “How do we move forward? We just keep playing, one game at a time.”